I recently bought myself a Patisserie book, by Murielle Vallette. Among other things, I wanted to have a try at making my own puff pastry. This is an excellent book, as it has photos showing you all the steps. This time I didn't fancy making any of the suggestions in the book with my puff pastry, so made these easy turnovers. I adapted the ingredients from an idea I saw on Pinterest, which were turnovers using pear and walnuts. I had a search through my cupboard and found some cranberries lurking in the back. When I'd cooked the apples they were rather too mushy to put in the pastry, so I thickened them with some cornflour. I used Braeburn apples as they were in the fruit bowl, but you could use any apples. I decided to ice them with some simple glace icing.


Preheat oven 180C/gas 4.  Line a baking tray with parchment paper or a silicone sheet.
Cut the apples into small dice and put, with the dried cranberries, brown sugar, cinnamon and the 250ml of water into a pan and cook over medium heat for about  8-10 minutes till the apples become soft.
You need to thicken this mixture, so mix 30ml of cold water with 1/2 tbspn of cornflour and mix well. No lumps!
Take the apples off the heat and stir in the cornflour mixture till the apple mixture has thickened.  Cool.

On a floured board roll the puff pastry into a 15 x 12" or 38 x 30 cms [approx] rectangle (1/2 cm thick). Cut into 4 x 4" or 10cm  squares. Put a heaped tbspn of filling in the centre of the pastry square.  Fold the pastry into a triangle and press your fingertips firmly into the edges to seal the pastry together (if the pastry will not stick together you can use an egg wash brushed along the edges to help).  Put on a baking tray spaced out evenly.
Bake for 25-30 minutes till golden.  Let them cool and drizzle with some cinnamon icing if you fancy.

To make the cinnamon icing, sift the icing sugar into a bowl.  Add the cinnamon and add a very small amount of water, adding more if you want thinner icing. Drizzle over the turnovers. 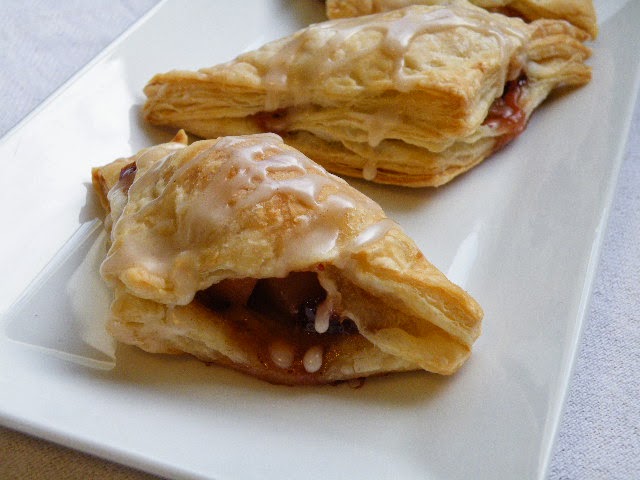 You can see by my photo that I didn't seal the edges very well, but they were delicious anyway! Liked the combination of apples and cranberries and the cinnamon gives them that gentle hint of spice. Think it was a good way to use my pastry, and maybe next time I'll try the turnovers with a different filling - like the idea of the pear and walnut, but maybe rhubarb and ginger .... ? Will make puff pastry again, but will try one of the ideas in the book, like chocolate millefeuille.

This is the second time I contacted you about your blog and this is just a follow up. If this message disturbs you, I apologize. I will make sure that this would be my last message that regards to our project.

We Alldishes.co.uk, one of the biggest recipe search engine in UK, Ireland and in the world, would like to invite your blog to join our site and make your recipes available to many people. If you like it, you can join through this link http://www.alldishes.co.uk/add-your-food-blog

This is one way to share your recipes to the world and it can also help you to increase your blog traffic.

HOw lovely - someone at work today put cinnamon in their tea and the smell was driving me mad - I neeeeeed cinnamon!

I admire your dedication in making your own puff pastry. These do sound really good and, of course, the pastry looks just right.