I've been a follower of the GBBO since it started, but have rarely made anything I've seen. This series I thought I'd try and made something from each week [or two!]'s programmes and decided on a Madeira Cake. My Mum used to make it frequently, sometimes in a round tin and sometimes in a loaf tin. I decided on the latter as it's easier to cut.
I looked at recipes from Mary Berry, James Martin, the WI baking book, the Good Food site and the BBC food site, and the recipes all had the same amount of butter, sugar, flour and eggs. The only difference was that a couple added ground almonds, a couple added milk and some added lemon zest.
Mum's recipe in her much-used notebook had the same quantities as the others, but used plain flour with baking powder. It's a very plain version  - no ground almonds, milk or lemon zest.

Beat all the ingredients together, except the peel and spoon into the tin. Put the peel on top in the middle and bake for about 95 mins. leave the cake in the tin for about 5 mins then cool on a wire rack.

I was pleased with my cake - it had risen and had the famous 'crack' in the top. I can't see the lemon peel, but it was there!

I wanted a bit more sweetness so I drizzled some icing over the cake when it was cool - made with lemon juice and icing sugar. 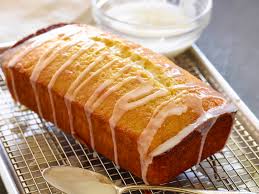 There are so many variations to this cake; Mum made a fantastic orange coconut cake using the basic cake mixture and adding coconut and orange juice to it. Then she cut the cake in half and filled it with an orange butter icing. She covered the cake with a thick icing and then dessicated coconut for our family 'Snowball Cake', a great favourite for birthdays.

I was so eager to write about Mum's 'Snowball Cake', that I forgot to say that the cake was very light, a nice even crumb and a a soft buttery texture. I found the lemon peel - it had sunk down into the cake! It's a good plain cake.
at August 10, 2015

Traditional cakes are often the best! This looks really good.

I think the Madeira cake is a great classic and very underrated. Yours sounds just right. I usually add lemon zest but not the ground almonds. I know that it's usually eaten with tea or coffee these days but I think Madeira cake does go very well with a little glass of Madeira, PX or sweet wine. I'm afraid I can't be as positive about GBBO, unfortunately - not my thing at all. I really like the sound of the orange coconut cake, by the way.

I love madeira cake - it's classic for a reason. Yours looks great