Two of my favourite bakes are Bakewell Tart and Flapjacks of any kind, so I decided to combine the two and try and make some Bakewell flapjacks. I was very pleased with the result, as were my children who ate some then took the rest back with them! I just managed to get a photo before they all disappeared!

I didn't make any pastry as you would with a tart, but used the flavours of a Bakewell and the ingredients of a flapjack.

Melt 150g butter, 50g caster sugar and 4 tbspn golden syrup in a pan. Then add 200g oats, 50g ground almonds and 1 tspn almond extract. Mix together.
Spoon half of this mixture into the tin and flatten till smooth. Spread 3 tbspn jam [ I use blueberry, but you could use, strawberry or raspberry] over the mixture leaving a frame round the edge.
Spoon rest of mixture on top and spread so it covers the jam. Sprinkle over a handful of flaked almonds.
Bake for 15-20 mins till the edges start to go golden.
Leave to cool in the tin, then cut into squares - the flapjacks will still be moist, so cut them carefully. 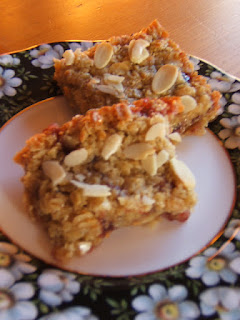 I found it a bit difficult to spread the jam over the bottom layer; maybe leaving that to harden a bit would make it easier? It's also quick sticky even after leaving it for several hours and again I think it's  because of the jam layer.
But, you get a good almond flavour as you would in a Bakewell, then the sweetness of the jam, the lovely oat mixture and then the crunch of the almonds. Something I'd make again.

What a lovely idea - two of my favourite things too!

Brilliant idea! I'd try warming the jam before spreading, it might be easier.

Nice combination (or mash up as I'm told the youngsters tend to say these days).