January 6th is Epiphany, when the Kings came to visit Baby Jesus, and in France you have a Galette for the Kings.

It's a tradition to put a fève or bean in the centre of the galette, and whoever finds this in their slice is King or Queen and wears a gold crown [which is given with the galettes when you buy them in the baker's or supermarkets in France].
I made 2 galettes to take to my French conversation group today - one traditional one and one to which I've added some apples - not traditional!

For the traditional one you need:

For the apple version you just need to add 2 eating apples [I used Gala], 1 tspn cinnamon, a knob of butter and 1 tbspn caster sugar

Roll out the 2 packs of pastry and cut a large circle out of each.
Put the caster sugar, ground almonds and melted butter in a bowl and beat together.
Add the beaten eggs and mix well.
Put one of the pastry circles onto the baking sheet, then spoon the almond mixture on top, stopping 2 cm from the edge. Top with the other pastry circle.
For the apples version - melt a knob of butter in a pan, then add the apple cubes, 1 tspn cinnamon and 1 tbspn caster sugar and fry till golden. Spoon the apples over the almond mixture then brush the edge with water and put the other pastry layer on top. Press the pastry circles together using your fingertips.
Make a motif on top of the galette with a sharp knife.
Brush the top with eggwash and bake for 25 mins.

This is my traditional one 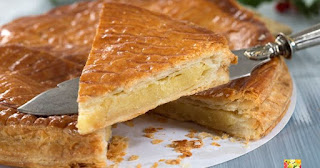 This is the one with apples 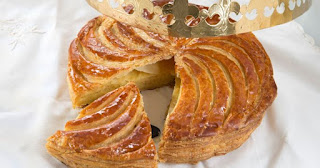 My daughter did the traditional swirly pattern on the apple one, much better than mine, as I didn't cut deep enough so the pattern didn't really show!
I love the simple one, the crisp pastry contrasting with the soft almondy filling. The apple added another texture and flavour, but I prefer the traditional one.
at January 02, 2017

They both look delicious! I've made Rick Stein's version which adds cherries - I used a jar, rather than fresh - and that was good too!

They sound very fine to me and very suitable for the Epiphany celebration. I came across an apple version some years ago in Normandy (well, of course, apples and Normandy are never far apart) and I must admit that I actually prefer it to the traditional. Sadly everyone I know is always trying to lose weight after Christmas excess at this time of year and so I don't get to make a galette these days.