Yet another loaf cake to add to my repertoire - well the recipe used a 900g loaf tin, but I wanted a round cake so used a 20cm springform tin. Inspiration for the cake was a few very ripe bananas in the fruit bowl. I rarely use alcohol in cakes, but this time I did what the recipe said, and soaked the sultanas in the rum.
I wanted to try a different topping so I used a butterscotch one I'd wanted to try for ages - I know it has a lot of sugar in it, but for a special occasion..........!

In a small pan pour the rum over the sultanas and bring to the boil. Remove from the heat and leave to soak.

Put flour, baking powder, bicarb, salt and cinnamon in large bowl and mix well.
In a separate bowl beat the butter and sugar with an electric mixer till light and fluffy.
Beat in the eggs one by one, then stir in the mashed bananas, sultanas, rum and the vanilla extract.
Fold in the flour and pour into the tin.
Bake for 1-1¼ hours until golden. Leave to cool on a wire rack. 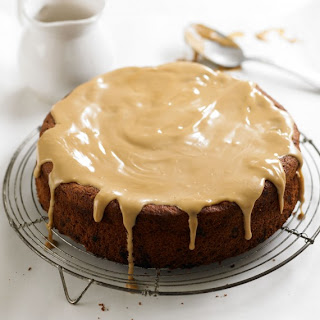 For the icing - simmer all the ingredients over a low heat for 6-8 mins. Stir to make a smooth sauce, then leave to cool and thicken, and pour over the cooled cake.

I liked the rum flavoured sultanas in the cake, but I did find the icing rather too sweet, even for my palate. The friends I made it for however, loved it. The cake had a good crumb, as Mr Hollywood would say, and was moist, with a good banana flavour which wasn't overwhelmed by the rum sultanas. Will make it as a loaf cake next time, without the rum and the sweet icing. Enjoyed the cinnamon in the background, which gave the cake that extra something.

ps I have a new photographer - OH has bought a new camera and will take the photos for me!

That is a very good photo. You're very lucky to have someone take the photos for you - it's my bete noir and always takes up far too much time.

The flavours of the cake sound good, butterscotch and banana are a delicious combination, but I'm with you on not liking things too sweet.

Love the sound of this cake. Maybe I would put warm sauce in a jug to pour over. Makes a change from using my over ripe bananas in banana bread or muffins. Can't wait until I have some to try this out.

Oooh, I'm always on the lookout for new banana cake recipes and this one does look good! I like the sound of that topping too, even if it is very sweet. Lovely photograph, love the styling!

Oh my! That topping looks heavenly!