Have been trying to unravel the difference between various American words used in desserts - slump, grunt, cobbler and buckle. I've made a cobbler a few times, cutting out scone-like cobbles to put on top of the fruit but what's a grunt or a slump? Great words, and what  pictures they conjure up.
I found a recipe in an American book I bought from 'The Works' years ago, for a Blueberry Buckle. This sounded intriguing so I had to make one. What is it? It's a cake mixture with the fruit added which is put into the bottom of the cake tin, and a streusel type mixture is spooned on top. The name Buckle is supposed to have been used because the top of the baked dessert looks like it's buckled under the heat  - it does, so maybe there's some truth in this idea. 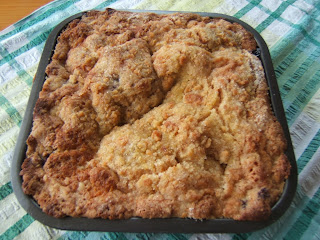 I altered some of the amounts in the recipe, as there seemed to be too much flour in the cake part. I'll certainly make the recipe again, but I'd use less sugar in the topping as it was way too sweet for our tastes.
I should also have tossed the blueberries in some flour before adding them to the cake mixture, as most of them sank to the bottom of the cake.

If you want to try a Buckle, then here's my adapted recipe - the original was in cups, so I converted it to grams, and it worked out fine.

Preheat oven 190c/gas 5
cake mixture - cream the fat and sugar, beat in the egg; mix the baking powder and salt into the flour and add to the mixture, alternating with the milk. Add the blueberries and spoon into a 8" square cake tin, well greased.

topping - rub the fat into the flour and add the sugar and cinnamon. Don't rub it too fine - you need it a bit lumpy. Spoon this over the cake mixture in the tin. Bake for 25-30 mins. 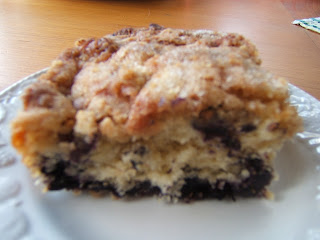 You can see how most of the blueberries have sunk to the bottom of the cake layer.  I loved the contrast between the soft cake layer with the juicy berries and the crunchy topping.  It's a delicious dessert, warm or cold, and OH ate his with cream.
Oh, I forgot to say that a slump and a grunt are the same thing; different parts of the USA use different names for them. It's stewed or baked fruit with a scone-like topping rolled out over the top [or put underneath in some areas with the fruit on top!]. This is one definition of them, but I'm sure other people would disagree and have their own ideas.

It looks delicious, Eira :)
I also find that American recipes often use too much salt or sugar.
I like the look of the crust on top of the soft cake layer.

Thanks Julie. it was really delicious, but a bit too sweet.

Looks lovely. I have come across buckles and slumps before but grunts was a new one on me. I can sort of see why a slump is called a slump but I've no idea why a slump should be called a grunt.

There are various answers Phil; one is that a grunt is the noise people make eating the dessert and another is that it's the noise the fruit makes under the pastry while it's cooking!