One of my favourite French desserts, which you find in most French Patisserie shops and supermarkets, is a 'flan'. It's like our custard tart but with flour added to the custard mixture, which makes it more solid, just like a set custard. I've never made one, but browsing on the web I found a few recipes.
Apparently, French pastry chefs use a 'Flan' powder.
Some recipes used sweet shortcrust pastry, others puff pastry, but the method was usually the same. Some added seeds from a vanilla pod, others vanilla extract.
I decided to make some sweet shortcrust pastry  - these ingredients make 250g of pastry.

Put the butter and flour onto a working surface and rub the butter in till it's fine breadcrumbs.
Make a well in the middle and pour in the milk, then add the salt and sugar and dissolve them in the milk with your fingertips. Add the egg yolk and mix it all together using both hands.Only mix till everything's combined.
Cover with clingfilm and put in fridge to rest for at least an hour.
You could use a food processor or a stand mixer with a paddle.

Bring 280ml milk and 1 tspn vanilla extract to the boil.
In a large bowl whisk together 2 eggs and 40g of caster sugar till white, then add 15g of cornflour, mix well and pour in the boiling milk.
Put the flan tin with pastry in the oven, then carefully fill with the custard mix using a jug. It's easier to do it like this so you don't spill the custard!
Bake for 30-40 mins at 140C/gas1 till golden brown.
Cool in tin. 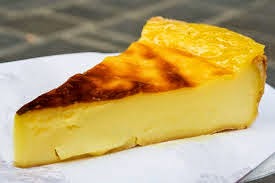 I love the texture of this tart. It's smooth, but solid, and I like the contrast of the pastry at the bottom. I've seen lots of things added to the basic recipe, but I like it plain, just like this!

I agree that plain is best. (Although a little variation is no bad thing sometimes). I love the look of your version. It looks authentic and totally yummy to me. I know that I should treat flan with respect as a fine dessert and sometimes I do but to me it's the ultimate French street food and I'll eat a piece (messily) on any French beach, riverbank or pavement at the drop of a chapeau.

I agree Phil. It's great anywhere.

I love it too, and yours looks perfect! Believe it or not I don't eat it so often but it is very satisfying.
Poudre à flan is cornflour with vanilla flavouring. I am surprised proper chefs like Pierre Hermé use it because the flavouring is artificial. You could use custard powder in its place, though cornflour and real vanilla taste better!