I love financiers - the little French almond flavoured cakes that look like little bricks. I wondered where they got their name, so after a bit of googling it seems that they were first made in the 19th century by a Parisian pastry chef near the Parisian stock exchange, and he made them look like little gold ingots. They became popular with the financiers, hence their name. Maybe this is the true story, or maybe not? Anyway we love them. I wanted to try a different flavour, and found this idea of using green tea on a French web site - they used it in muffins, so I thought I'd try it in financiers. The recipe makes about 24 cakes, but I only made half the mixture.


But butter in a solid based pan and bring slowly to the boil then cook gently on a low heat till nut brown [beurre noisette]. Take off the heat and filter the butter through a fine sieve.
Beat the egg whites till frothy then add the icing sugar a little at a time. Mix the ground almonds and flour together and fold into the mixture with the tea. Mix together well. Add the butter and stir continuously till well mixed.
Put covered batter into fridge for a couple of hours.
When ready to use, preheat oven 220C/gas 8 and butter a 2x12 hole financiers or muffin tins.
Fill the holes 2/3 full then bake for 5 mins, turn temperature down to 200C/gas 6 and bake for further 10 mins. Cool in the tins. 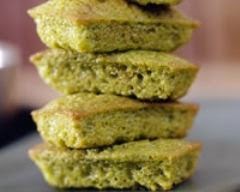 I know they're not very inspiring to look at, but they taste really good. They have a crisp outside and a soft middle, and a the ground almonds give them a fairly dense texture. The green tea gives a subtle flavour, but you can still taste the caramelised butter.
Financiers don't keep well, so need to be eaten on the day they're made - no hardship!
A few tips from my neighbour - watch the butter when heating as it quickly burns, mix the batter as little as possible - just stir till blended. and rest the batter in the fridge before using.
You can keep the batter in the fridge, covered, for a couple of days.

What a beautiful colour they've come out! I love a financier, they are so light and delicate

I haven't had a financier in a while and that's not a good thing. One of my favourites and I love the idea of the green tea. I heard the same explanation for the origin of the name on French TV and anything the TV tells me must be true.