We've been eating sweet potatoes for some time, but have never tried them in a cake. I wanted to make something different last week to take to OH's family get together, so decided to make a sweet potato cake. There are lots of recipes and ideas on the net, but many, as is usual with American cakes, had so much sugar.
I played around with a few recipes, tweaking this and that, and tried this one out first as muffins. It we didn't like them, the birds could have an early Easter present! They certainly tasted different, but pleasantly different, so decided to make the cake.
Lots of the recipes I looked at had a marshmallow frosting or some other sickly stuff. This one is one I've used many times since being given it by an American neighbour - it's not too sweet, and I love cinnamon!

The first thing you need to do is to roast 2-3 medium sweet potatoes in oven 190C/gas5 for 45 mins or so till soft. Cool. You could cook them a couple of days before and keep them in the fridge.

For the cake: preheat oven 180C/gas 4. Grease and bottom line a 20cm round cake tin.

Peel the sweet potatoes and mash them well till smooth. You need about 375g of the potato for the cake.

Sift 250g plain flour into a bowl with 13/4 tspn baking powder, 1/2 tspn bicarb., 1 tspn cinnamon,  1tspn ginger and 1/2 tspn cloves. In another bowl or in a mixer beat together 115g butter and 190g soft brown sugar till nice and fluffy. Add 1 tspn vanilla extract and 2 large eggs and beat till well mixed. Stir in the sweet potato then fold the flour mixture in gently.
Spoon the mixture into the tin and bake for 35-40 mins. Cool in tin for 5 mins then tun out onto a wire rack.

Mix the icing sugar, cream and cinnamon in a bowl until smooth, then drizzle over the cooled cake. 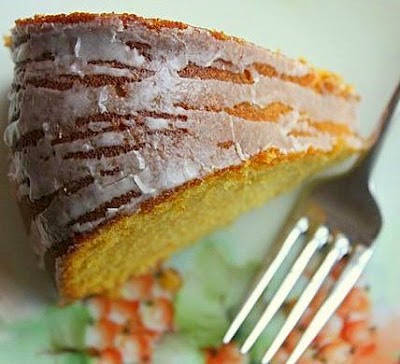 I was expecting the cake to be orange, the same colour as the potatoes, but it wasn't. 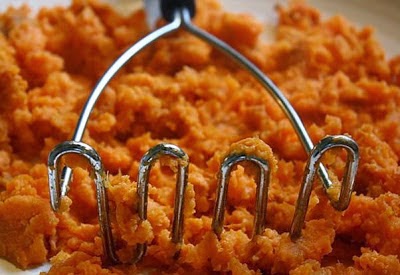 It's a moist cake with a soft texture, but doesn't really taste of sweet potatoes. It has a good spicy flavour and the icing is just enough to be a good contrast. It is sweet, but not too sweet. The family enjoyed it, and I was asked for the recipe!

I've used sweet potato in baking a couple of times, but the results have been contradictory. Dan Lepard's brownies were delicious, but a cake recipe I tried was very heavy and stodgy. Yours looks a much better texture.

I like the sound of this a lot. I've never tried an American style of sweet potato cake before. I usually think of Caribbean sweet potato bakes but I think I need to broaden my horizons.