What is a Bavarois? Well, according to the internet it's  the French name for Bavarian cream, it is a delicate cream dessert with a crème Anglaise base made from either milk, cream or a fruit puree and then aerated with whipped cream and whipped egg whites before being set in the refrigerator with gelatine. It may be a straight vanilla or combined with additional flavourings; such as chocolate, coffee or liqueurs, served on its own as an individual dessert or as a filling for a variety of charlottes, tortes, cakes etc.

So now you know!
I wanted a dessert for my son and family's visit this week, and I found this in an old French magazine cutting. It's unusual in that instead of having a pastry case and filling it with the Bavarois cream, you use dessicated coconut, flour, milk, egg whites and sugar to make a sort of nest.

In a largish bowl mix together 250g of dessicated coconut, 100g caster sugar, 3 egg whites and 1/2 small glass of water into a kind of pastry. Spread this mixture thickly onto the base and up the sides of the tin and bake for about 30 mins.at this temperature then increase to 180C/gas4 for another 10 mins.  Leave it to cool in the tin.
For the cream - put 2 leaves of gelatine in some cold water; beat the 3 egg yolks with 150g caster sugar till creamy, then add 20g flour and fold together. Add 300ml of milk to thin the mixture, continuously beating to avoid lumps.
Put 100ml of whipping in the fridge to get cold.
Melt 100g of dark chocolate 70% in a pan and when it's melted, pour in the egg mixture and mix over a medium heat till the it thickens. Add the melted gelatine and mix again. Leave to get cold.
Beat the cold whipping cream with a hand held electric mixer till thick then add it to the melted chocolate. Very carefully fold this into the egg mixture and spoon into the coconut nest.
Put into the fridge for at least 4 hours before serving with a little dessicated coconut sprinkled on top if liked. 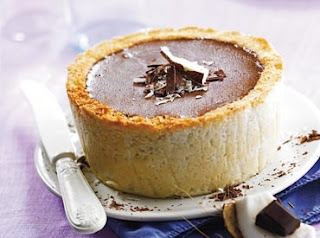 It's very rich, and a small portion is sufficient. The recipe said it was for 4 people, and it looks small in the photo my son took, but it's on a large dinner plate. I grated some chocolate on top instead of coconut. It was more work than I  usually do for a dessert, but tasted so good and creamy, and the nest had a great coconut flavour and a very unusual texture.

Gosh that looks good - perfect for entertaining over Christmas too