My love of cinnamon is well known, so when I got given some apples, I decided to try a recipe given to me ages ago by an American friend. It's nothing special to look at, but tastes great - that's of course, if you like cinnamon! It's not overwhelming, as there's none in the cake only in the topping.

The recipe uses butter milk and oil. The amount of cinnamon sugar topping suggested for the cake was far too much, even for me, so I reduced it drastically, and there was still plenty.

Put the brown sugar, oil, egg, buttermilk, bicarb, vanilla extract and flour in a big bowl and mis together well. Stir in the apples then spoon the batter in the tin.
Mix the granulated sugar and cinnamon together and sprinkle over the top of the batter.
Bake for about 1 hour 10 mins. The recipe said 45 -55 mins, but although the topping was nice and crunchy, the cake wasn't cooked in the middle. Leave in the tin for 5 mins, then turn out onto a wire rack. 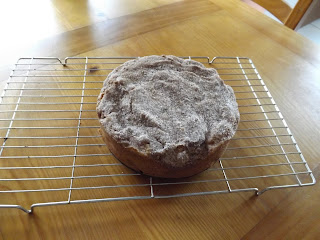 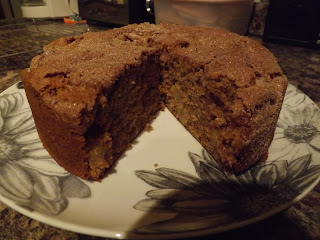 Sorry about the photos. My camera has died, so am trying to use my husband's 'posh' one!

It's a typical American cake in that it's very sweet. I served some as a dessert with crème fraîche, which counteracted some of the sweetness. Some friends had a slice with a cuppa and they didn't find it too sweet.
You can see that there's plenty of sugar topping, but the recipe said 150g sugar and 3 tspn cinnamon!
It's a light crumb and a soft texture, and the crunchy topping makes a good contrast.

Every USA citizen I've ever met seems to have been a huge fan of cinnamon (and sweet cakes as well come to think of it), so I'm not surprised that this is an American recipe. To be honest, I'm not that keen on too much cinnamon, but the cake sounds like a fine dessert cake and I could always cut down on the cinnamon.