This is one of our favourite apple desserts. Traditionally a clafoutis is made with cherries, but my friend also makes this one with apples, and kindly gave me her recipe. Using cornflour isn't traditional either, but it works well.

Preheat oven 180C/gas4
Grease and flour a deep dish - the one I used was 23cm in diameter and 8 cn deep.

Peel the apples and cut into slices. Layer into the base of the dish.
In a bowl beat the eggs and sugar together till white and fluffy. Add the sieved cornflour, cream, vanilla and cinnamon and mix well.
Pour over the apples and bake for 30-40 mins.
It can be eaten warm or cold. 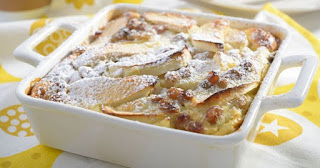 I sprinkled some sultanas onto my clafoutis before baking, and sieved some icing sugar over the top when baked. I love the original version, but I also love this one, because the apple adds another layer of texture.
at April 30, 2018

Sounds very good to me. A clafoutis is always welcome as far as I'm concerned. I've never tried using cornflour but I'll definitely remember that as an option. As I found out by saying the wrong thing some years ago, if you were in the Limousin they'd insist that this was a type of flognarde and not a clafoutis.