My younger daughter is coming today, so I thought I'd make her some biscuits with her favourite flavour, orange. I love cinnamon, so this seemed the perfect one to try.
The recipe comes from a free booklet in a 'Woman's Weekly' magazine a few years back, but I've changed it slightly to give the thins a more orange flavour.

Put the butter, sugar and orange rind in a bowl and beat till creamy. Beat in the egg yolk and 2 tspns of the orange juice. Add the salt to the flour and then stir into the mixture till it's all nicely blended.
Make into a ball, wrap in film and chill for about an hour.
Take it out, unwrap and roll dough out between 2 sheets of baking parchment  into a 30 cm square.
Take off top sheet and brush the dough with the rest of the orange juice and sprinkle over the cinnamon. Lightly roll it, then roll it up like a swiss roll.
Wrap in film and chill for 30 mins.

Unwrap the dough and cut into thin slices with a sharp knife.
Space put well on the baking trays and bake for 10-12 mins.
Cool on the trays for 5 mins or so, then put onto a wire rack using a palette knife. 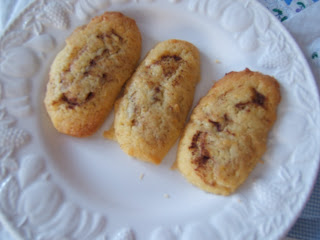 So you can see that I didn't manage to roll them up like a swiss roll! The dough was very hard to handle, even with baking parchment, and when I rolled it up, it stayed rather flat. I'd left it in the fridge for 30 mins, maybe I should have left it longer.You can just about see a swiss roll-ish shape in the biscuit on the left. They taste very good.
I added a tspn of orange extract to the dough instead of 1 of the 2 tspns of orange juice, and I used a large orange, giving more zest.This gave the thins a good orange flavour.
Would I make them again - I don't think so.
at February 11, 2012

How did the cinnamon and orange to together?

It's a good combination BG, maybe a bit unusual but you can taste both flavours.