We had some friends for a few days and it was G's birthday, so I wanted to make a nice dessert instead of a cake. He loves ginger, and I had a large jar of ginger confit bought on our last French trip. This could give the cheesecake a good ginger flavour, and be the decoration on the top. I read somewhere recently that ricotta makes a good cheesecake, so decided to use half ricotta and half my usual Philly. I used digestive biscuits, but could have used something with chocolate in them.

Blitz the biscuits in a food processor or bash them with a rolling pin.
Melt the butter and mix with the biscuits crumbs.
Use your fingers to press it into the base of the tin, then put in the fridge.
Melt the broken up chocolate in a microwave or over simmering water.
In a bowl beat together the ricotta, Philly, sugar, eggs and yolk. Add the melted chocolate and the chopped candied ginger and stir together.
Pour into the tin and bake for about an hour.
Let the cheesecake cool, then put it in the fridge overnight or for 12 hours.
Sprinkle some icing sugar over the top then decorate with the rest of the ginger, left in pieces this time and not chopped. 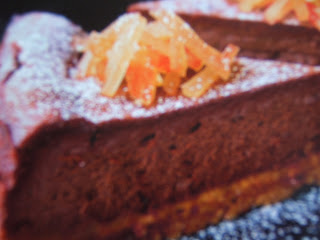 It had a really good ginger flavour, and I liked the mixture of the ricotta and Philly. Maybe another time I'll try half ricotta and half fromage frais.  The cheesecake had a nice smooth texture, and then the bit of crunchy ginger. I'll make the cheesecake recipe again without the ginger, and maybe use something else which is slightly crunchy, as I really liked the added texture to the smooth filling.