Thought I'd make a pudding instead of a cake, and this French one is a family favourite. It has my favourite spice, cinnamon in it, but you could change the spice to ginger, or maybe cardamon, both of which go well with chocolate,  or even add a bit of chilli powder.

It's made in individual portions in ramekins.

Break the chocolate into chunks, then add to a pan with the cream and butter over a bowl of simmering water. Beat the eggs with the sugar then add the melted chocolate mixture, cinnamon and flour and mix together well.
Spoon into the ramekins and bake for 9 mins. Leave to cool then turn out onto a plate. 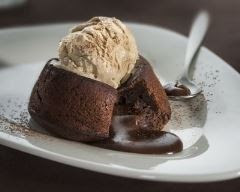 It turns out like the infamous molten chocolate pudding, which has been the bane of contestants lives on Masterchef! The cinnamon gives it a lovely spicy flavour, and I love the smooth, runny chocolate centre. I always serve it with ice cream to give another texture.
at November 07, 2016

What a great photograph you've taken for this delicious pudding!

Thank you Suelle. Have to admit that my daughter took it!

Always love this kind of pudding and you (and your daughter) make it look so good but I must admit that I'm not too fond of cinnamon so I'd definitely swap that.