Coconut seems to be one of the 'in' things as you see coconut oil, creamed coconut  etc. My late husband hated coconut, so not wanting to eat a whole cake on my own, I rarely made one.
This is a recipe given to me by my neighbour, so I promised to make it. I suppose it's called a Caribbean cake because of the coconut and pineapple jam in it?

Cake: In a large bowl put 175g butter, 175g caster sugar and 3 eggs. In another bowl, sift together 175g sr flour, 11/2 tspn baking powder and 1/2 tspn freshly grated nutmeg.
Beat the butter, eggs and sugar then fold in the flour mixture plus 55g desiccated coconut and 2 tbpsn creamed coconut. Mix well.
Divide the batter between the tins then bake for 25 mins till golden. Cool in tins for 5 mins then turn onto a wire rack.

Spread 3 tbspn pineapple jam [I found some in a local Caribbean shop] over one of the cakes and spread half of the butter cream on top. put the other cake on top and spread the rest of the buttercream over it. Toast some desiccated coconut [ carefully or it will burn!] and sprinkle over the top. 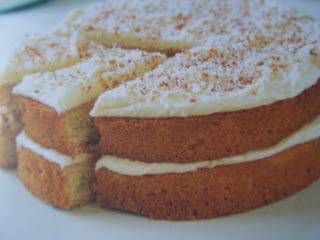 The cake had a nice soft crumb and the coconut flavour was strong, but not too strong. I'm not sure if I liked the pineapple jam, but that may be because I'm not a great fan of pineapples!
The topping was a good creamy contrast to the soft cake, and I liked the toasted coconut which gave a bit of a crunch. A nice addition to my 'cakes with tea' recipe list.
at June 01, 2017

This sounds my kind of cake - if I was eating cake! I've done no baking for several weeks now, apart from a batch of biscuits and some brownies for my son. I'm having withdrawal symptoms - although I'm not sure whether it's baking or eating that I miss most.

It looks delicious!
I got a jar of pineapple jam in either Sainsbury's or Tesco recently, can't exactly remember which, but I got it for sandwiching together my hummingbird cake.

I know how you feel, Suelle as I only make cakes to take somewhere or for my children. Jean, I didn't think I'd find pineapple jam n our supermarkets! I've been thinking about making a hummingbird cake for a leaving party. I thought it was the same thing as a carrot cake till I read the recipe!

I can remember really disliking coconut as a kid but it's definitely a taste I've grown into. I really like the idea of a coconut cake now especially with that creamy topping. I've tried pineapple jam in the past but I have to admit it's not one of my favourites.