I didn't get time before Christmas to post this biscuit recipe. It's yet another variation on the basic cookie recipe I posted a while ago.
I made up a hamper for my aunt and wanted to make her some special biscuits. There was a box of Matchmaker chocolates and a bar of white chocolate hanging round, good Christmas flavours, so how could I use these? I came up with the idea of a double cookie - 2 cookies with the Matchmakers chopped up in them, sandwiched together with a white chocolate ganache. A real Christmas treat for my aunt.
I thought they'd be fiddly to make, but they weren't.

Beat butter and sugar together, then add egg yolk and vanilla extract and beat in. Stir flour and salt together nd add to the mixture. Then add the chopped up Matchmakers and stir thoroughly. Divide the dough in 2 and wrap in clingfilm and put in fridge for an hour.
Take out androll out between 2 sheets of cligfilm or baking paper.
Cur out cookies using a 6cm fluted cutter. Space them out well on the baking sheet and bake for 10-15 mins till golden.
Cool on a wire rack.
Por the cream into a pan, add the chocolate and melt over a low heat, stirring from time to time till smooth.
Take off heat and let ganache cool. Chill in fridge till it has a spreadable consistency.
Spread ganache over half the cookies and top with the rest. Dust with some icing sugar. 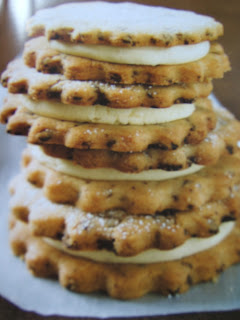 My daughter was the tester and loved them. She said what she liked best was the contrast between the crunchie choc mint cookie and the soft white chocolate filling. I had to make a second batch for her to take home and to work, and used some After Eight type mints I'd been given instead of the sticks, and they worked fine.

I also made some Angel Cookies using just the basic recipe and cutting out angel shapes. I iced them with  thick white glace icing and sprinkled the tops of their heads with some edible silver glitter. 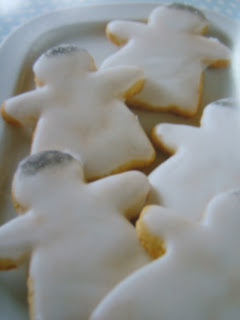 Merry Christmas and a very Happy and Healthy New Year.
at December 25, 2012 No comments:

This is a cake I was asked to make by a friend . I'm not a coconut lover, nor do I like pineapple, so not really my kind of cake. Anyway, I learned something by making it - how not to burn deccicated coconut when toasting it! Pineapple jam was new to me, but my OH loved it. This is the recipe I was given, tweaked a little bit, as I didn't add any coconut flavouring as suggested. Enough is enough!

225g butter, softened
225g vanilla/caster sugar
4 medium eggs
225g self raising flour
splash of milk
50g desiccated coconut, toasted *
5 tbsp pineapple jam - or more if you're feeling generous
*Sprinkle the coconut on a baking tray, pop in the preheated oven for 4-6 mins until toasted to a nice brown colour, and the smell is wonderful [of coconut!]. Keep and eye on it as it burns easily - as I found out!

Cream together the butter and sugar until light and fluffy. Add the eggs, one at a time, beating well after each one, then fold in the flour, milk, and 20g of the toasted desiccated coconut. Mix until light and fluffy, then divide equally among the tins.
Bake for 20-25 minutes until light golden and springs back when the surface is lightly pressed with your finger. Turn out on to a wire rack to cool.

For the buttercream, beat the icing sugar and butter with a stand mixer or electric beater till light and fluffy. While the beaters are still mixing, add the hot simmered down Malibu. Mix well again.
Put a cooled sponge on a plate. Spoon some of the jam over the sponge. Use as little or as much as you like. Sprinkle over some of your remaining toasted coconut. Gently spread some of the buttercream over the jam. I made a mess doing this! Put another sponge on top, and repeat. Top with the final sponge, then spread the rest of the buttercream over the top and finish with a sprinkling of toasted coconut. 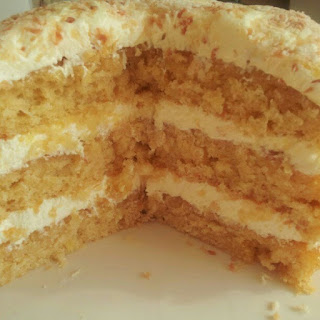 I asked my friend to tell me what she thought of it. She said the texture was lovely and soft, and she especially liked the filling and topping with the added Malibu. I was pleased with the end result as I've not made many three tiered cakes. So if you're a coconut fan, this is the cake for you! 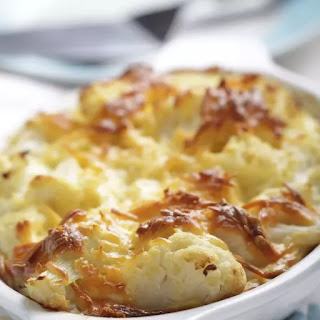