Having a good sort out in the food cupboard this morning, I found a jar of mincemeat leftover from Christmas.
I remembered having a recipe somewhere which uses it in a cake. It's an old recipe, originally cut out from a magazine, but I've tweaked it several times.

Beat the fat and sugar together till creamy, then beat in the eggs, one at a time. Fold in the flour and cinnamon then the mincemeat and water.
Spoon into the tin and bake for about 30 mins till golden.
It's got a nice light texture. 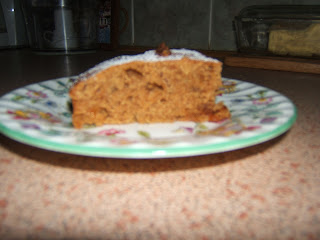 Lovely to get a reminder of Christmas at this time of year.