We are great mince pie fans, so I'm always on the lookout for a different version. Found this recipe in a Christmas pull-out from 'Prima' magagazine [from the 80s I think!] . It uses ground almonds in the pastry and it's made in a similar way to one of my favourite small cakes,Welsh cheese cake; by this I mean that you have the pastry shell, then a layer of mincemeat, then the lemon cake layer. In the Welsh cheese cake you'd have the pastry, then jam,  then cake.


This recipe makes 36 pies, but thought this was too many for us,so I halved the recipe, taking the measures to the nearest gram. This is the full recipe.

For the cake filling:

Make the pastry by putting the flour and cinnamon in a bowl and rubbing in the butter. Add the ground almonds then mix in the egg and milk to make a soft dough. Chill the dough in the fridge for half an hour, wrapped in cling film. Then roll out the dough and cut out 36 circles to line bun tins. Put a teaspoonful of mincemeat in each pastry case.

Make the cake by beating all the ingredients together till nice and smooth. It's just a good old sponge mixture.Spoon on top of the mincemeat then smooth the tops. Bake for 20-30 mins till golden. Cool on a wire rack.

I'm not sure that I'd have bothered about the icing if my dil hadn't been here and wanted to do it! I'd have happy with some sifted icing sugar on top. So she did the fancy lines on top by mixing the icing sugar and lemon juice and putting it into an icing bag with a small hole cut out of one corner. 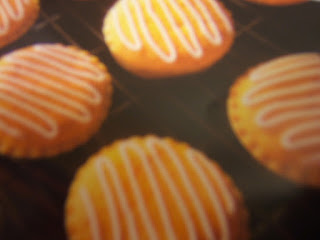 These little pies are really delicious. A great Christmas offering. Next time I'll make the full 36, just with icing sugar on top!

Another lovely idea, snowy. Perhaps we should all be looking through our old books and saved recipes more often.