There seem to be a lot of blueberries on offer in the supermarkets, so decided to buy some to try out a recipe given to me by my friend. She says it's a cross between a blueberry muffin and an old fashioned cheesecake with a cream cheese filling. Sounds interesting. I think the original recipe must be American, as it's called a coffeecake.

Topping - rub all the ingredients together till large crumbs.
Filling- soften cheese and beat with the sugar using an electric mixer till creamy. Beat in the egg, lemon rind and juice and almond essence till smooth.
Cake - Put flour, baking powder and salt in a bowl. In another bowl put the butter and sugar and beat with an electric mixer till light and fluffy. Gradually beat in the eggs and then the almond essence.
Beat in rhe flour mixture gently, alternating with some milk, till it's well mixed; if it's too stiff, add a little more milk, then fold in the blueberries.
Spread about half of the mixture on the bottom of the dish, smoothing the top and making sure it's right in the corners. Spread the cheese filling over and sprinkle with about a quarter of the topping. Drop the remaining cake mixture on top by spoonfuls, but try not to mix up the layers! Sprinkle the rest of the topping evenly over the surface.
Bake till the topping is crisp and golden - about 50 mins to 1 hour.
When cool, cut into squares. 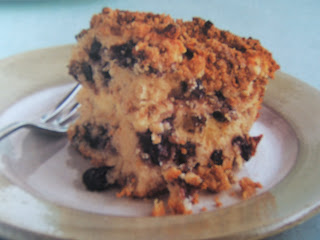 The recipe sounds complicated but it isn't. It's a bit of a faff making the topping, but I added the spices to the flour, then rubbed in the butter and sugar and finally the nuts.
I love the cheese filling and the streusel topping which give the cake different textures.
The reason a glass dish is suggested for cooking is because the blueberries 'could react with metal'. Not sure I agree with this, as I've cooked blueberry cakes many times in a springform tin with no problems. Anyway, I used my glass shepherd's pie dish, which was about the right size.
It's not an every day cake, well not for us anyway, too many calories, but it's a nice cake to make to share with friends, or as a dessert maybe, with some creme fraiche.
at February 25, 2012

That does sound delicious! I guess it would work well with other fruits too (raspberries/strawberries?). A great dessert or teatime treat!

It sounds really delicious, with the topping, the berries and the cream cheese!