My friend gave me some pears from her tree, so I had to use the ripe ones quickly. Pears are one of my favourite fruit, but there seems to be such a short time between being unripe, ripe and too ripe.
Another flavour we love is almond, and pear and almond go well together.
When living in France I went on several cookery courses, and the lady who ran them became a friend. Her recipes were family ones, and she's kindly let me use any of her recipes on my blog. This is one of them.
It always impresses guests because it looks like something you'd buy in a patisserie [at least I hope mine does too!], but is easy to make. I've used British cake tins and temperatures and translated her recipe.

Cream together 175g butter and 175g caster sugar and 1 tspn vanilla extract till nice and fluffy, then beat in 3 eggs. In a bowl add 175g sr flour, 50g ground almonds and 1/2 tspn baking powder. Mix together then add to the batter.
Peel and core a large ripe pear [about 300g unpeeled], then thinly slice a quarter and chop the rest up finely.
Fold the chopped pear into the cake mixture with about 2 tbspns of milk to make a nice dropping batter.
Spoon the mixture into the tin and arrange the pear slices on top, pressing them down gently so that they lie in the batter but you can still see them.
Bake for 1-1/4hrs till golden. Brush the top with a tbspn of apricot conserve or jam which has been warmed, then leave the cake to cool in the tin. 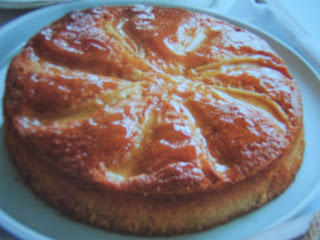 It's a good mix of textures, the almond flavoured sponge and then the softness of the pear chunks. We ate ours as a dessert with some creme fraiche, but it would be equally good with a cuppa.

This looks delightful! One of my favourite flavour combinations, too - the only thing which could improve it would be chocolate! ;)

Pears are an excellent fruit for baking and that combination of almond and pear is so lovely. And very French, too. Delicious. Oddly enough, I have come across pear and almond cakes in Wales as well. There must be a Wales and France connection that I'm not aware of.

We used to have a Breton onion man who came to our little town every year - a Welsh/French connection!!