Recently it was Bramley Apple week, so I decided to make an apple cake, and found this WI recipe amongst my mil's collection, but to be honest, for me, it doesn't really live up to its name. It needs a stronger toffee flavour, but I liked the idea of enhancing the apple flavour by using Calvados. We love apple cakes, and I have lots of recipes, but this is the first toffee apple cake I've tried.
I had a look online and there are lots of different ideas  - I liked  this one from Rosie Bakes It blog, but there seems to be a bit too much topping for me and she adds dates, just as I did for my Sticky Toffee cake, and I didn't want to use dates - I want the toffee flavour to come from something else. Another idea was to put some Carnation Caramel in the cake mixture - this recipe uses it, one from the Good to Know site.

Beat butter and sugar till fluffy; add eggs one at a time. Then add the milk and apple brandy and beat in. Add the nuts and chopped apple and fold in. Fold in flour and cinnamon and mix well.
Spoon into the tin and smooth the top. Decorate edge and middle of  cake with pecan nuts. Then sprinkle over the demerara sugar.
Bake for 40 – 45 minutes or till firm to touch.
Leave the cake in tin for 10 mins before turning onto a wire rack. 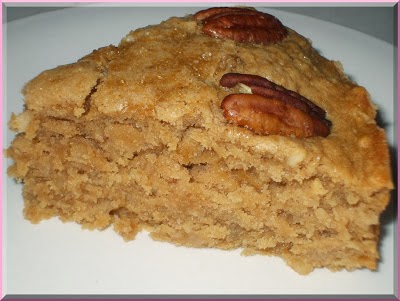 In the original recipe the apple was grated, but I chopped it up finely, as I wasn't in a grating mood!
The cake has a good soft crumb, is a light texture, and I like the little bites of apple and the background flavour of the Calvados, but as I said, it could do with something to give it more toffee flavour. There is a hint from the topping and from using the dark brown sugar, but I'm going to see if I can make my perfect toffee apple cake. Watch this space!
I think the cake would make a good dessert if you served it with a toffee sauce.

It looks really lovely and substantial, almost like a steamed pud! Yum!

I'm so impressed that you knew that it was Bramley apple week. These things pass me by. Apparently I've just missed National Chip Week. This does look rather good and, let's face it, Calvados is always welcome. Toffee is a difficult flavour to produce in a cake I think but I'm definitely looking forward to the results of your quest for a perfect toffee apple cake.

I think I'd like this as I can find toffee an overpowering flavour. Love the texture of it