One of my favourite French desserts is a Charlotte, and I had a tin of pears which needed using and a recipe from a French neighbour for making a chocolate and pear one. It doesn't need cooking, just chilling.
I bought a Charlotte mould when living there, but you can use any deep cake tin.
It's simple to make and delicious.
Charlottes can also be made with bread.

Open can of pears and pour syrup into a small bowl and slice the pears. Dip the boudoir biscuits into the syrup and line a Charlotte mould with them, keeping some back for the top.

Using an electric hand beater, beat the cream and vanilla sugar together till it's thick.

Melt the chocolate over a low heat. Turn the heat off and add the egg yolks, beating together till the mixture cools. Add the cream and mix together.

Put in the fridge for 12 hours, then carefully unmould the Charlotte. 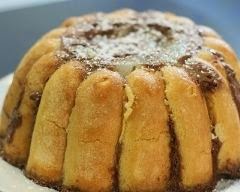 You can see that a Charlotte mould is curved, so made in an ordinary deep cake tin it won't look quite the same. You could use other fruit to make a Charlotte - strawberry, raspberry, blackcurrant, gooseberry etc The biscuits I used were quite thick, as I bought them in France, but any thinner boudoir biscuits work just as well.

There are some great Charlotte recipes here

That looks lovely - I think pear is my favourite fruit to pair (excuse the pun) with chocolate.

I adore pear and chocolate - this looks amazing!

Pear and chocolate is an excellent combination and a portion (or two) of this would suit me just fine.