Thought we'd have a change from chocolate cakes, so decided to make a traditional cider cake from Herefordshire. Doing a bit of research about cider cakes I found that this cake was baked for the annual Cider festival. Several other counties make cider, so I expect they have their own versions of the cake.Some friends brought us some local cider they'd bought there, so made use of some of it in this cake. It's a simple cake, easy to make. You could vary the spices to suit your taste, and I suppose that the type of cider you used would make a difference to the flavour.

grease a 20 or 21cm square cake tin and line the bottom.

Cream together 125g butter and 125g caster sugar till nice and fluffy. Add 2 beaten eggs and mix well. Sift 225g sr flour with 1 tspn bicarb, 1 tspn cinnamon and 1/2 tspn ginger. Fold some of the flour into the batter then add 200ml cider. Mix together well. Fold in rest of flour and spoon into tin. Bake for 35-40 mins till golden.
Cool in tin, turn out onto a wire rack and sprinkle with some caster sugar. 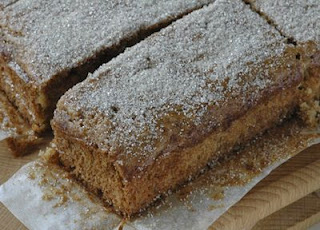 Lovely moist, light texture and a good cider/apple taste, with the spices adding an extra layer of flavour. The inside of the cake was speckled - maybe the reaction between the cider and the bicarb? Anyone a food scientist?!!

I liked the look of this cider cake from HFW in The Telegraph:
http://www.telegraph.co.uk/foodanddrink/recipes/8776536/River-Cottage-Baking-recipes-family-cakes.html?image=6

That sounds lovely. Oddly enough I was thinking of making a cider cake myself a couple of weeks ago just because I hadn't eaten one for years. I couldn't find my recipe (which I think was from Devon) and just ran out of time as so often these days but I've no excuse now.

lovely cake, Eira! And interesting too. The Germans make red wine cake so why not with cider.

I love a cider cake - love the sugary topping too. That is heaven in cake form for me!

I found your blog on The Cake Crusader website - lovely Hereford Cider Cake from a county very close to where I live. I used to live in the East Midlands in Melton Mowbray......