On Wednesday mornings I help with a Toddlers group. We're having a little Christmas party next week so have been trying out some biscuits. My grandson was here testing the results!
This recipe came originally from Woman's Weekly, I think. It's in a pull-out about baking with children at Christmas. How many stars you make depends on the size of your star cutter!

In a bowl or mixer beat the butter, sugar and egg yolks till it's creamy. Add the salt and flour and mix together. Bring together into a ball, cover in clingfilm and put in the fridge for 30 mins.

Roll the dough out to about 5 mm thick, then cut out stars. Put on baking tray and bake for about 15 mins. Cool on a wire rack.

While they're baking, make the icing. Mix the icing sugar and egg white together. Once the stars are cool, spread some icing over, leaving a circle empty in the middle. I put a small cut out cardboard circle in the middle and spread the icing round it [and on it!]. Sprinkle some white sugar sprinkles over the icing while it's still wet.
Melt the chocolate and put into a small piping bag. Pipe 2 chocolate eyes. Put a dab of white icing and stick on the red Smartie for a nose. Dab another bit of white icing at the top of the star and sprinkle on some red sugar sprinkles for a bobble. 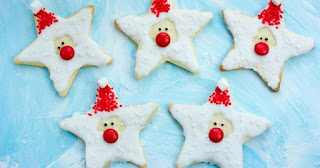 They are a bit fiddly to decorate, but my grandson loved them and he took the rest [just a few after he'd eaten his fill!] for his brothers. A nice crunch to the biscuit and a mixture of textures in the topping. Will be making some for the Toddlers.

I've got to agree with Suelle, these are very, very cute and worth the decorating effort.