As we've had so much hot weather, they've been prolific and they've had a wonderful flavour. They've lacked water, and we've got a hosepipe ban, so I've been using the 3 water butts, now they've run out! 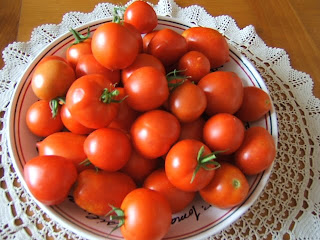 Bob picked yet more today, so I decided to make some soup with some and I made a starter with a few more. 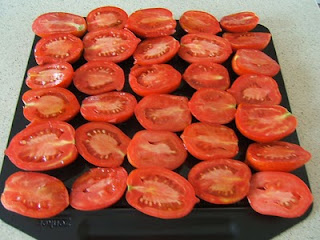 These are some lovely plum tomatoes going into the oven to be roasted, just drizzled with olive oil. These will be for the soup. 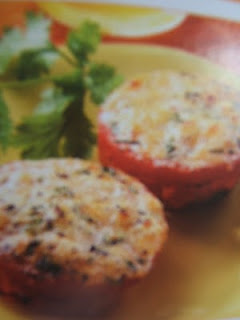 This is the starter. It's not a good picture as it's from a French magazine.
It's mozzarella tomato gratin.
for 4 people you need:
6 tomatoes, 1 ball of mozzarella [125g],
4 tbns grated parmesan, 1 clove of garlic
4 stems of parsley, 4 stems of basil, 1 tspn thyme
evo, s&p
Preheat oven 160C/gas6/325F
Cut the tomatoes in 2 horizontally and put them on a greased baking sheet. Sprinkle them with the thyme, s&p and a glug of evo. Cook them for about 40 mins.
Grate the mozzarella coarsely. Chop the basil and parsley. peel and chop the garlic.
Mix these with the grated and parmesan and about 10cl evo. Spread this on the cooked tomaotes.
Put under a grill for about 5 mins. Serve warm. Great with grilled chops or steak.
at August 15, 2010

Email ThisBlogThis!Share to TwitterShare to FacebookShare to Pinterest
Labels: tomatoes

I hope you've got space to grow all your veggies in the new house. Those toms look gorgeous!!

Am having a greenhouse, so won't be without my tomatoes! It's a great year here for them.

Just found your blog and look forward to reading more of it.