I've seen a lot in magazines and online about whoopie pies so as I had some marshmallows in the cupboard, I thought I'd have a go at some.
This recipe comes from the June edition of Sainsbury magazine and is by Dan Lepard, one of my favourite bakers.
You'll find the recipe on Dan's forum here .
The recipe makes a lot of pies so I halved it. I think the pie is a cross between a biscuit and a cake. As there's no raising agent in the recipe, they don't rise very much. I just spooned the mixture on, but if you want a really good shape, you need to pipe them. Oh, and I added some grated lemon rind to the mixture. 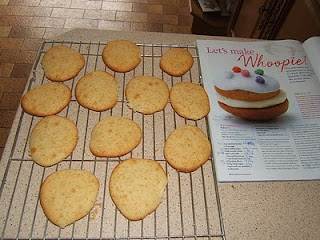 The mixture for the pies is quite thick, thicker than the normal cake mixture. 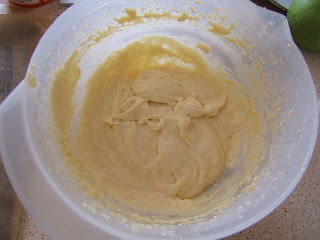 The marshmallow were big ones, but they melted easily. 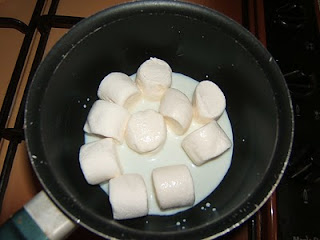 This is the melted mixture. 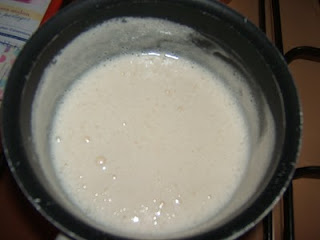 One very important thing, you must let this mixture go cold before adding the soft butter or it doesn't work! I was impatient and added the butter while it was still warmish and it didn't become a nice fluffy filling, just a runny one!
Only had pink marshmallows left,so my second attempt at the filling is yellow rather than white! But at least it worked this time.
I didn't put any icing on top, as the original ones don't have it and I thought they'd be too sweet. 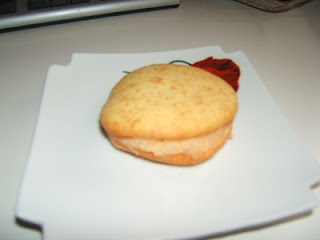 They taste fine, but to be honest, I don't think I'd make them again. They certainly aren't the 'new cupcake' imho. Maybe a chocolate version would be better?
at August 12, 2010

I've been thinking of making woopie pies ... thanks for the review.