I wanted to make something different and this recipe fitted the bill. It was given to one of our friends when they were staying in an hotel in Mumbai and is supposed to be a good ending to a spicy meal.
I've made yoghurt cake before, such as the one using a yoghurt pot as a measure, but this is completely different; for one thing it uses ghee, clarified butter. There's a big Indian community locally so I was able to find it in one of the Indian shops, but I think I've also seen it in the supermarket.You can make your own - heat double the amount of butter you need and pour it into a dish. Allow it to cool for 15mins then carefully pour off the clear golden liquid on top - this is the ghee. You don't need the milk solids underneath.
The cake has an icing made with sour cream and icing sugar. I made a few changes to the recipe as I don't like dessicated coconut, which was used to coat the sides of the cake tin after they'd been greased. The leftovers were added to the cake mixture -I didn't do this, but I did toast some shredded coconut, which I also found in the Indian shop, and used it to decorate the top of the cake.
Here's the recipe - I don't know the name of the hotel B got it from, but thank you to them!

Beat the ghee and sugars together till creamy then add the eggs one at a time, beating well.
Mash the bananas and add to the mixture with the yoghurt, flour and spices. Stir well to mix together.
Spoon into the tin and level the top.
Bake for 45-55 mins till firm and springy.
leave to cool in the tin for 15mins then turn out onto a wire rack.
For the icing - mix the sour cream and icing sugar together till it's thick and spreadable, then spread over the top of the cake and sprinkle on the shredded coconut. 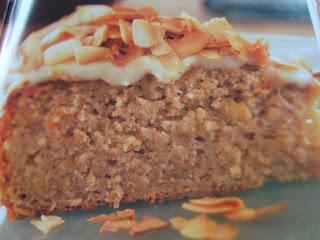 This is a very dense and rich cake, so cut it into small slices. It keeps well in an airtight tin.
I loved the texture, but found it rather sweet; I think Indian desserts are often very sweet, so would use less sugar if I made it again. The banana makes the cake moist, as does the yoghurt. The shredded coconut was a good addition, and gave it another texture. A cake with a difference to try, but maybe only for a special occasion.
To make the cake exactly as the recipe said, you also need 80g of toasted dessicated coconut. When you've greased the cake tin you pour in the coconut and tip the tin around to coat the sides. Tip out the what's left and add it to the cake batter.

Your cake looks really moist, I never thought of using Ghee in a cake before, looks delicious x

This sounds like an interesting recipe. I've never used Ghee in a cake but I love banana bakes so will be happy to give it a go!