I seem to have made quite a lot of calorific pudds lately, so I wanted to make something simple but delicious. I love French madeleines, so decided these would be just right. I know that Proust's plain madeleine is perfection, but I wanted to make them different, so decided to add one of my favourite flavour combinations - apple and cinnamon. [I'm in apple mode atm!] I used a jar of apple purée instead of bothering to cook some.

Madeleines look very simple, but I have had a few disasters making them. Some recipes say that you use brown butter, but you have to keep a close eye on the butter or it burns [one disaster]. Then to get the traditional hump, you need to put the batter in the fridge for 1-2 hours, and some recipes tell you to put the tin in the fridge too for an hour before using. One chef even puts his tin in the freezer. Then another says before you bake them you must heat a baking sheet in the oven, and put the madeleine tin on this. Did I say they were simple?

Making them is unusual in that you mix the flour, sugar and egg first and then add the warm melted butter. It's a Genoise sponge mixture.

I used the basic recipe which I cut out from a Marie Claire magazine many years ago, and added apple and cinnamon.  It makes 12 madeleines, just the right amount for my tin. They're best eaten fresh.

Flour and butter the tin well so the little cakes come out easily.

Beat together 150g caster sugar and 2 eggs till white and fluffy, then fold in 150g flour with a tspn of cinnamon added and stir in 125g apple purée. Melt 120g butter and add this to the mixture with a pinch of salt. Spoon a generous tbspn of the mixture into each hole and bake for 10-15 mins till golden. Don't overbake. Dust them with granulated sugar. 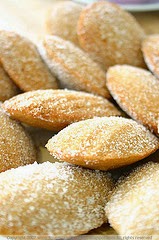 I should have cut one open to show the inside, but they were eaten so quickly that I just had time to take this photo! Three voracious grandsons! I love Dorie Greenspan's description of these as 'cakey cookies'. They're brown and crisp on the outside, then spongy and soft inside, and the puréed apple makes them extra soft, and I love the hit of cinnamon, not too much, just a nice hint.

These sound delicious and look perfect!

Madeleines are a very special and beautiful thing and I'm all in favour of some variations. I've never added apple before and it sounds delicious. The traditional hump is a bit of an obsession with some bakers I've come across but it's never worried me.

I love making madeleines but have never used apples and cinnamon in them but I will be now Thanks.