Having got back from our Lake District break on Saturday, my friend J asked if I'd make something a bit special for her sister's birthday. I know her sister loves anything with lemon in it, and I'd recently seen this recipe in an old French magazine. Also I had just enough Limoncello in the bottle. and it needed using.

I seemed to have used an awful lot of bowls!

I've never been a great fan of tiramisu, but I like the idea of a lemon one.  I used a small square loose-bottomed tin with deep sides to put the dessert together.

Juice and zest a lemon and in a bowl mix the juice with 50g of caster sugar and 4 tbspns of Limoncello. Keep the zest for later.

Separate 3 eggs and beat the whites into stiff peaks.

In another bowl whip 20cl of whipping  cream till thick - the cream needs to be very cold to do this.

In yet another bowl mix together 50g caster sugar, 250g mascarpone cheese, the 3 egg yolks, and most of the lemon zest. Add the whipped cream and the egg whites and mix carefully.

Put a layer of the biscuits into the bottom of the tin then spread over half the mascarpone mix.

Put on a second layer of biscuits, then top with the other half of the mascarpone mixture.

Sprinkle over the rest of the lemon zest.

Cover the top of the tin with cling film, and put in the fridge for at least 4 hours.

Turn out onto a serving plate, and decorate the plate with lemon slices. 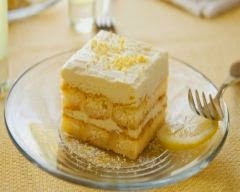 To be honest, I didn't get to try any of this, but my friend said it was delicious. Apparently lots of people at her sister's birthday tea asked for the recipe.

She took this photo for me and it's just one piece - I think half of this would have been sufficient as it's very rich.

I asked J about the textures so I could write about it here, and she said it was very lemony, and there was a good contrast of textures between the cake layers and the creamy ones. She also said you could taste the Limoncello - one of her sister's favourite tipples!
at May 04, 2015

That looks beautiful! I love the fact that it was solid enough to cut, rather than just spoon out. The only time I made traditional tiramisu it was just a bowl of slop - I must have chosen a bad recipe.

It looks and sounds delicious.

Suelle, I think this recipe uses more egg whites than most and this keeps it solid?

That would make sense Snowy! I think lemon juice also has a 'setting' effect on cream. It might be difficult to get the same result with a traditional version without using gelatine.

Gosh - your 'prove you are not a robot' business is getting tricky - particularly as it's in French too!

Oh dear, I'll have to see what I can do about it. I've tried to change from French to English with no luck.

Have changed it to English, and I just click in the 'I'm not a robot' box, no captchas to do.

It's back to just repeating numbers now - not difficult French questions about picking out the soups from a blurred bunch of photos!