Following on from the Madeira cake from week 1 of the GBBO, I decided to make some biscuits from week 2.

I'm not a fan of biscotti, or making fancy biscuit  holders, so decided to have a go at Paul's Artlettes. I cheated  and used ready made butter puff pastry and was pleased with the results. You'll find Paul's recipe here. The whirls aren't as good as his, but you could taste the cinnamon, and they were nice and crisp, and they had a good snap!! 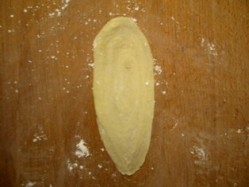 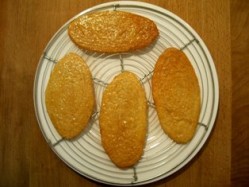 After making these I decided that I hadn't put enough cinnamon and sugar in them so made them again with bought butter puff pastry. My second attempt was much better; they're not as oval, but the spiral filling is better. 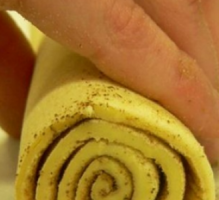 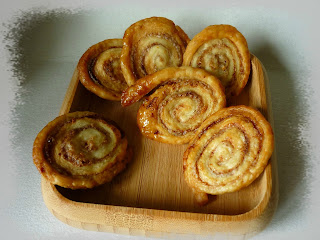 I also made some honey biscuits as I was given a local jar of honey to try. These are orange and walnut flavoured biscuits which are dipped in honey to glaze.

In a bowl put 125g butter, finely grated rind of 1 orange and 80g caster sugar. Beat well then slowly beat in 80ml sunflower oil till batter is fluffy.
Stir in 300g plain flour, 150g sr flour, 25g finely chopped walnuts and 160ml orange juice. Mix it together to make a soft dough.
Use 2 tablespoons to make the dough into ovals [like quenelles] and put onto the trays.
Bake for 15-20mins till light brown in colour.
Heat 250ml honey in a saucepan till warm. Dip the biscuits into the honey to coat, using a tongs. Put on a wire rack to cool then sprinkle some chopped nuts [about 2 tbspn altogether]. 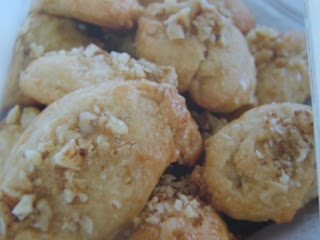 These aren't the prettiest biscuits, but they are delicious. Nice soft biscuit with a slight crunch from the walnuts and a lovely orange flavour, not too much, then the crunch on top from the nuts.
Make sure that the honey glaze has dried before you put them in a tin. The recipe makes about 30 biscuits, and I think it was originally a WI recipe, but my late mil gave it to me, so am not sure.
at August 19, 2015

The attempts at arlettes are interesting - from your photos it looks as if perfection lies somewhere between the two. Using bought puff pastry is the obvious shortcut! I love palmiers, and cinnamon, so I think I'd like these too.

The honey biscuits sound really delicious. I'm determined to try these soon. Can the leftover honey be used for anything after the biscuits are dipped, or is it all soaked up?

There was some honey left, so I used it on some toast!

I agree about the Arlettes - the second lot had the spirals, but were too thick!