My friend and I went on a day's Baking Course this week, and this Torte was one of the things we made. In Russian it's called a Bistvitny Torte.
It's not difficult to make, but I found mixing the 2 chocolates together to make marbled chocolate quite challenging, especially making the marbling even.
It was an interesting fun day, and we watched demonstrations of bread making and a complicated 4 layer gateau. We weren't expected to make these, but we did get to sample some of each.
We brought home the items we'd baked, and I asked if I could put the recipes on here, and was told it was ok if I wrote it in my own words. So that's what I'm doing!

What makes the torte different is that it's soaked in a brandy flavoured syrup, otherwise tbh it's a marble cake.

Make the decorations -
Melt 25g each of dark and white chocolate.
Put a sheet of baking paper on a baking tray and put alternative spoonfuls of the chocolate on the paper, and spread together to make a thick marbled layer. Leave it to set then cut into squares then triangles.

Cake:
Beat 175g margarine or butter with 175g caster sugar till nice and fluffy. Add 1 tspn vanilla extract and mix in. Add 3 beaten eggs, a bit at a time, then fold in 225g sr flour.
Divide the mixture in 2, then melt 50g dark chocolate and add it to one of the halves. Put spoonfuls of each mixture into the tin and swirl with a skewer to marble.
Bake for 30 till golden. Let cake cool in tin for few mins, then put onto wire rack to get cold.

Syrup:
Put 125g sugar in a pan and add 6 tbspn water and heat till sugar's dissolved. Then boil for 1-2 mins.
Take it off the heat and add 3 tbspn brandy. Leave to cool a bit, then spoon over the cake so that it soaks in. Whip 150ml double cream, put into a piping bag and pipe a swirl round the top of the cake.
Decorate with the triangles you made earlier. 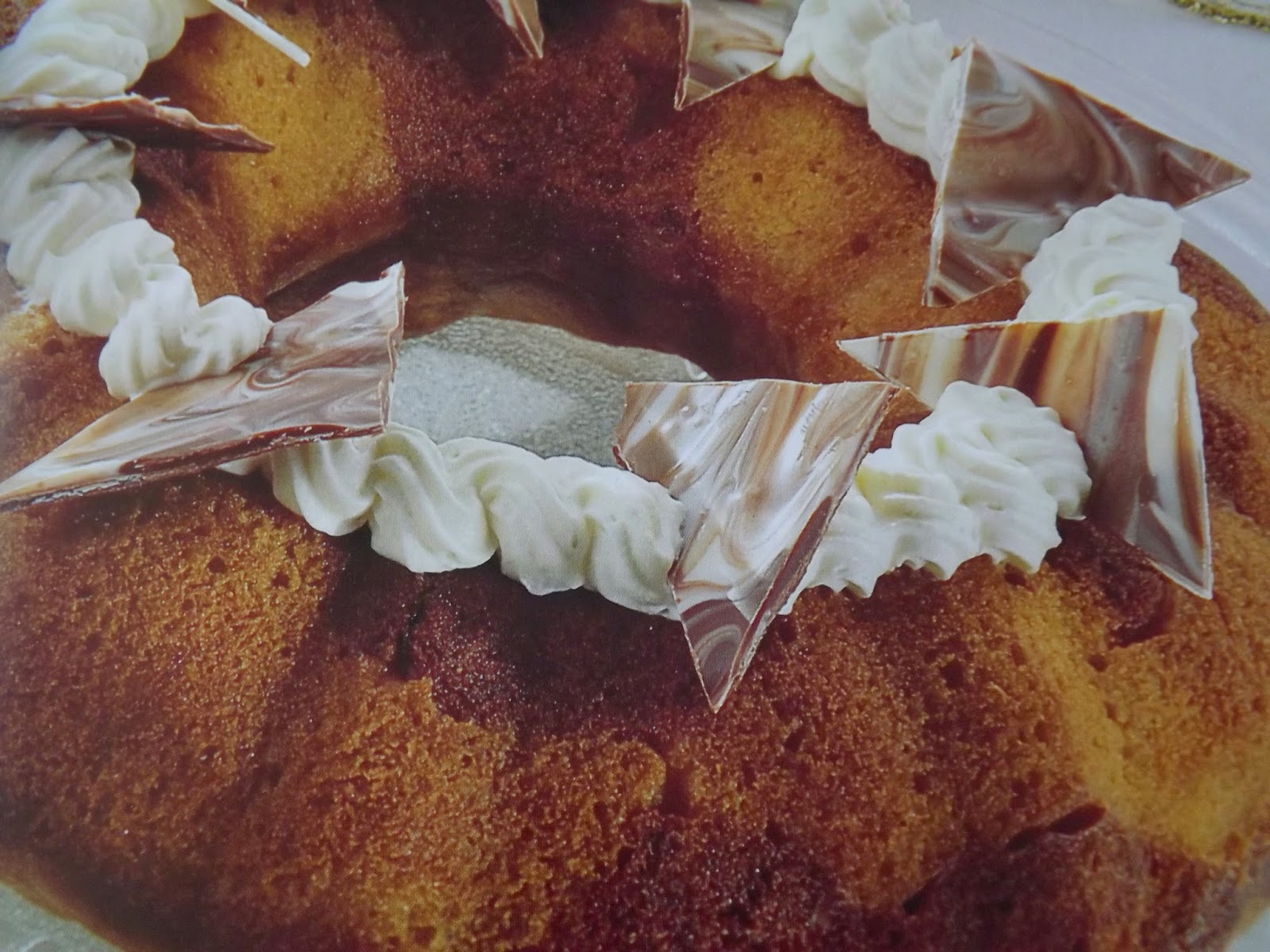 Even though the marbled chocolate was challenging, it's a nice idea. As chocolate and orange go together so well, you could maybe use Cointreau instead of the brandy. If you don't want alcohol in the cake, perhaps use orange juice?
The cake's nice and moist from the syrup, with a soft texture, and the cream is a good contrast with the crunchy chocolate.
Sorry it's not a very good photo [not unusual I know!!].

We also made a couple of types of biscuits, but will post these another time.

It just shows that you don't need anything really fancy to dress up a cake - it's a simple idea but looks really effective!

I love those swirly triangles. I do like the sound of adding a brandy syrup to a cake as well - brandy is not just for Christmas, it seems.

Looks delicious and I love the triangle decoration