I had one more lot of butter puff pastry left over from Christmas, and I've been wanting to make these tarts for ages, as I love custard tarts in any form. I don't think this is exactly like the famous ones, but they're made to a secret recipe! The tarts were first made by Catholic monks in the 18th century. Large amounts of egg whites were used to starch clothes, so the yolks left over were used to make cakes and pastries.

These are easy to make - you need 250g of puff pastry which you roll out. Lightly grease a muffin tin, cut out 12 small circles and  and line the tin with these. Put the tin in the fridge for about 20 mins.
For the filling - beat 4 egg yolks with 100g caster sugar till thick and white. Add 1 tspn of flour and the zest of a lemon, then mix in 25cl of crème fraiche. Pout into a saucepan and bring to the boil over a gentle heat, stirring all the time. As soon as it comes to the boil, take it off the heat and allow to cool.
Pour the mixture into the pastry cases and bake for 5-6 mins.
Put tarts onto a wire rack to cool, and sprinkle icing sugar and cinnamon over the tops. 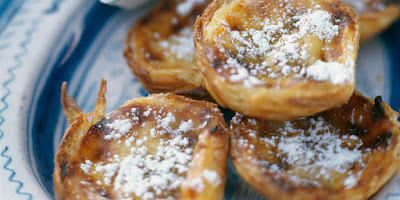 The tarts had a good texture, set, but not too solid, which was a good contrast with the puff pastry. The lemon gave them a sharp hint,  and the topping added another level of flavour. A nice simple treat.

I didn't know about egg whites starching clothes - that's a fine excuse for making custard. They look lovely and they're making me hungry. They remind me of a time when walking from the station to the place I was working took me past a Portuguese bakery - except I often didn't go past and would go in for a coffee and a little custard tart. So what if I was a little late? I don't usually like to remember times at work but this is a notable exception.

A great way to start the day, Phil.