I keep buying sweet potatoes and  forgetting about them, so decided to use them up in a cake. I had a look online, but thought most were too fussy for me. This one came from the book I've mentioned before, 'Cakes Mom Used to Make'.  It doesn't have an author, as it's recipes from different people.
It makes a big 3-layer cake, but as I was making it for a largish family get together, this was fine. The nuisance part was that you needed 3 x 23cm cake tins. I have 2, so borrowed the other one from my neighbour.

Preheat oven 200C/gas6
Prick 2 medium or 1 large sweet potato [about 350g], put on a baking tray and bake for about an hour till they're soft. Take them out and cool for a bit. When they're cool, you can peel and chop them and purée in a blender.

Turn the oven down to 180C/gas4. Grease the 3 cake tins and line the bottoms.
Sift together 320g plain flour with 90g of cornflour, then add 3 tspn baking powder, 11/2 tspn cinnamon, 1/2 tspn nutmeg and 1/4 tspn ground cloves. mix together.
In a mixer bowl, put in the whites of 5 separated eggs, and beat with the whisk on medium till they're frothy. Turn the speed up and add 50g caster sugar gradually and beat until fairly stiff.

In another bowl beat together the sweet potato purée, 150g butter, 11/2 tspn vanilla extract and 250g caster sugar and beat together till light and fluffy. I used a hand mixer as I only possess one bowl for my stand mixer!
Add the 5 egg yolks one at a time, then add the flour mixture, alternating with 375ml milk.
Using a spatula, fold in about a quarter of the egg whites, then fold in the rest carefully. Don't overmix.
Divide the mixture between the 3 tins and bake for 25-30 mins. cool cake in the tins for 10 mins or so then turn out onto a wire rack and cool completely.

Beat butter and cream cheese till fluffy, then add icing sugar slowly and beat for 2-3 mins till fluffy. Stir in the chocolate.

Put one of the cakes on a plate and spread with a layer of the icing, then put the next cake on top and do the same, then cover the top and sides. 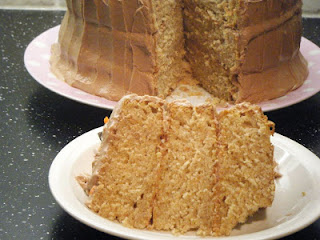 A rich cake with the cream cheese icing, so small slices! You could use a tin of pumpkin purée instead of the sweet potato.  I liked the hint of spices in the cakes, and the texture is fairly light, thanks to the egg whites, I suppose. For me it's a special occasion cake, not your everyday one with a cuppa.

Sounds like a very good special occasion cake to me. I'm impressed that you could come up with two matching cake tins - I always struggle to locate mine. I certainly don't think I know anyone with three.

I'm not a huge fan of sweet potato, but I've never had it used like this before. It's hard to look at that photo and not salivate at least a little!